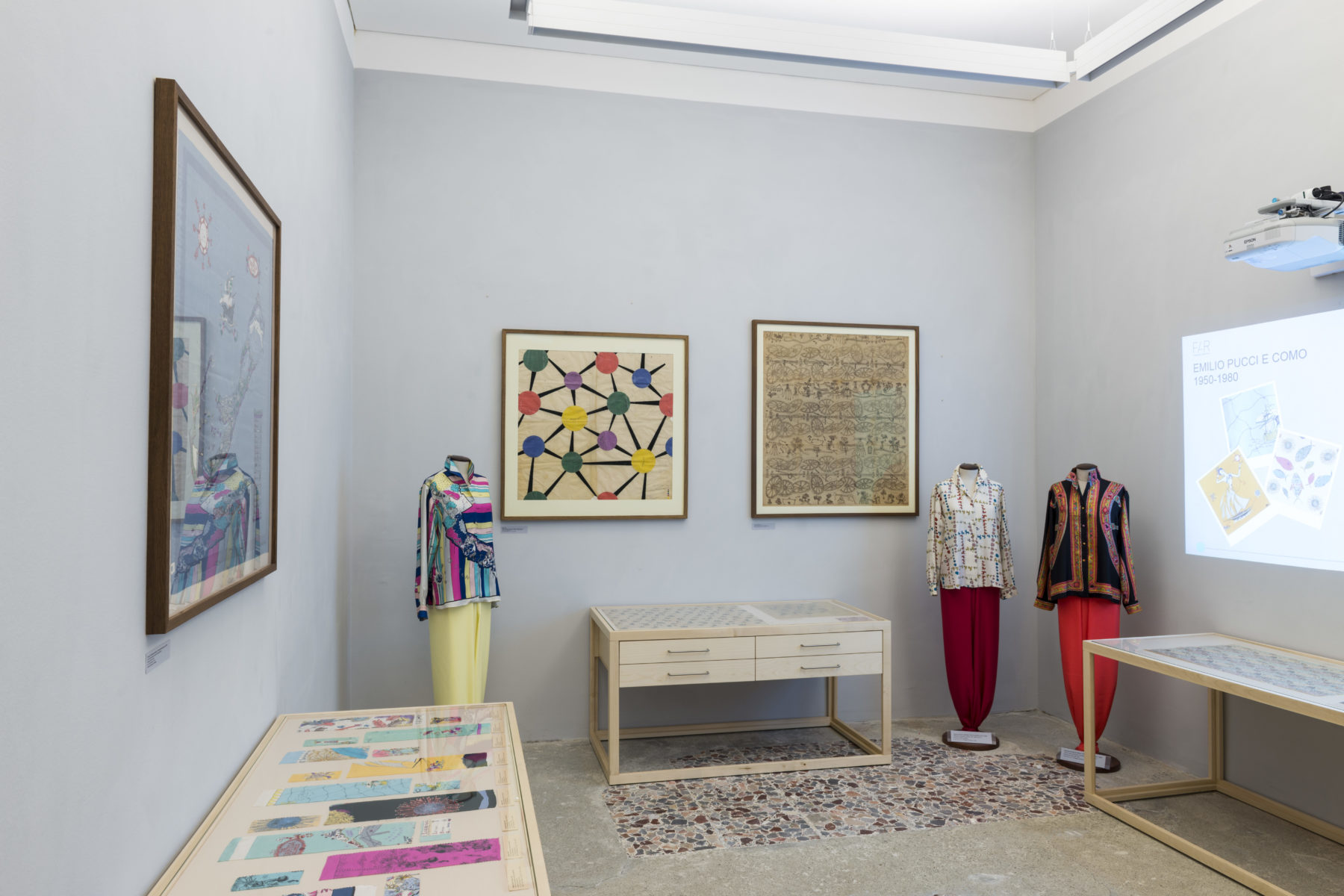 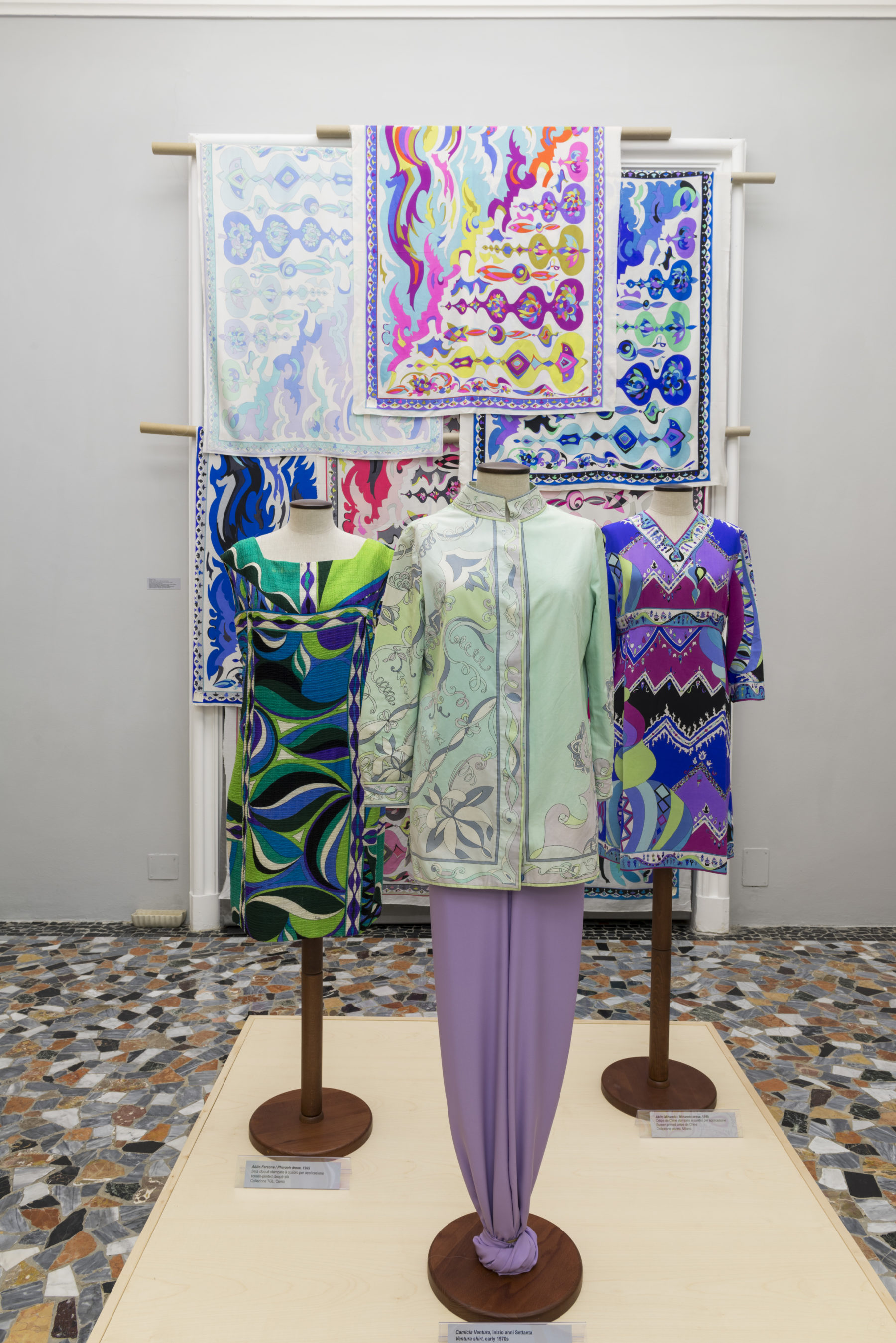 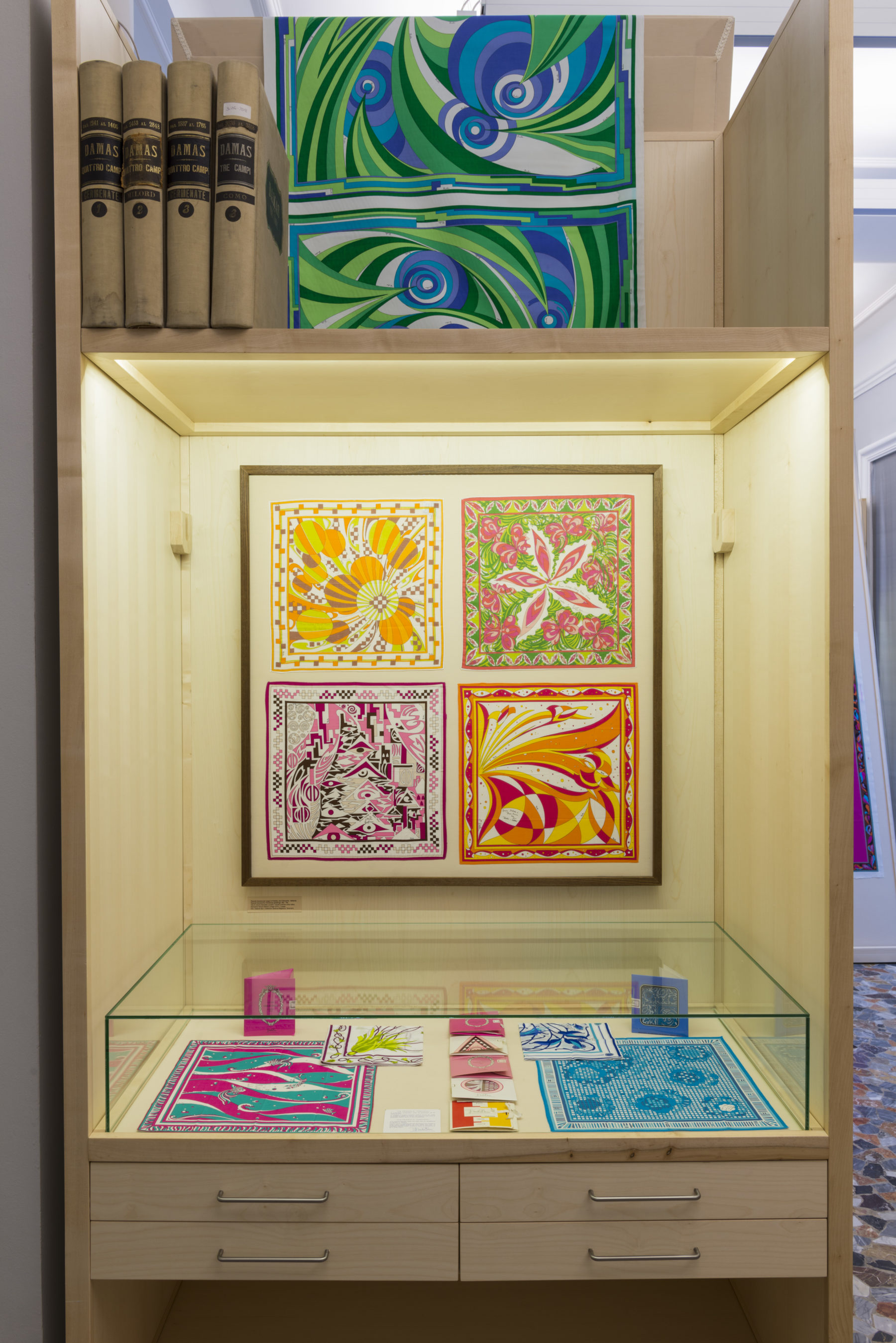 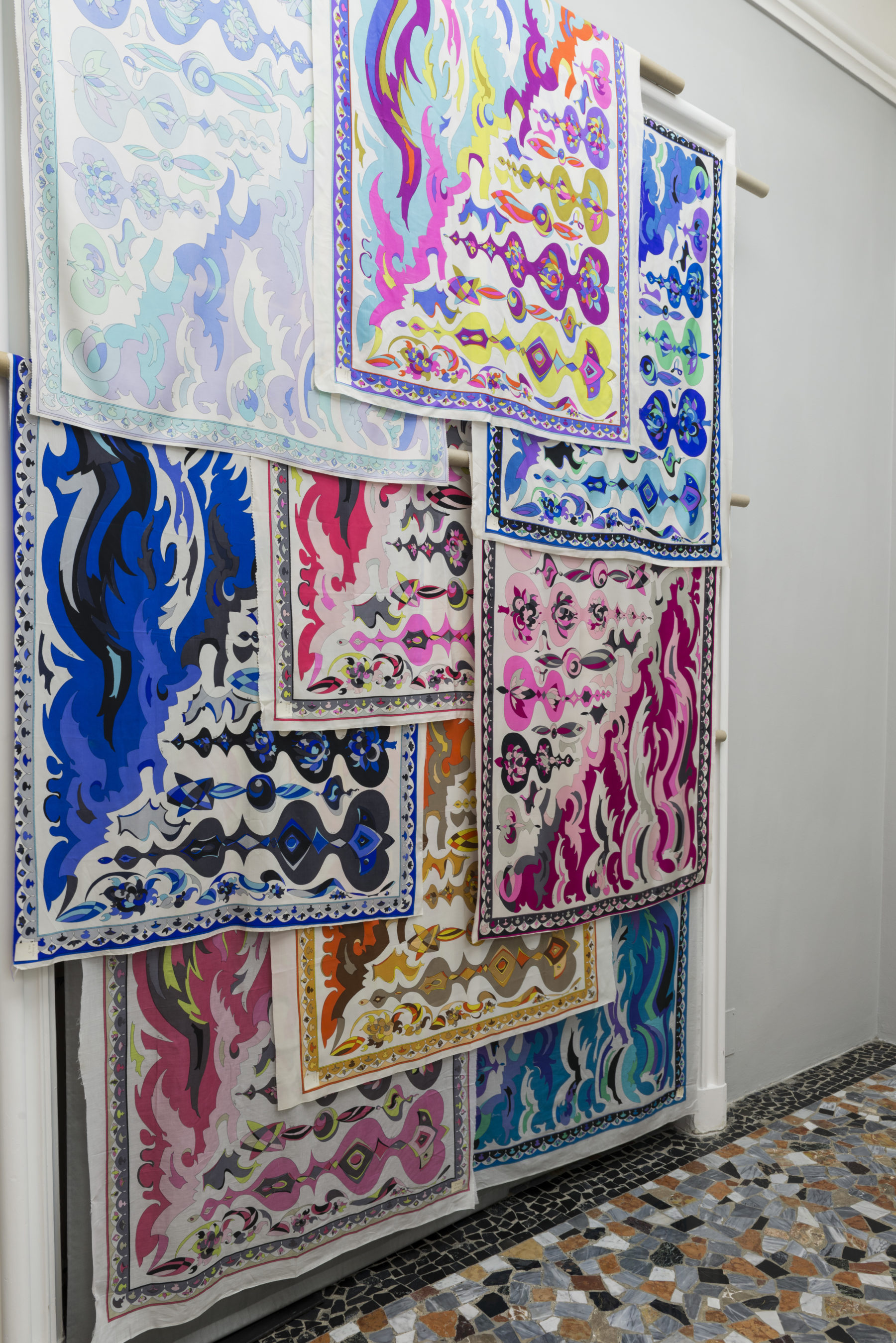 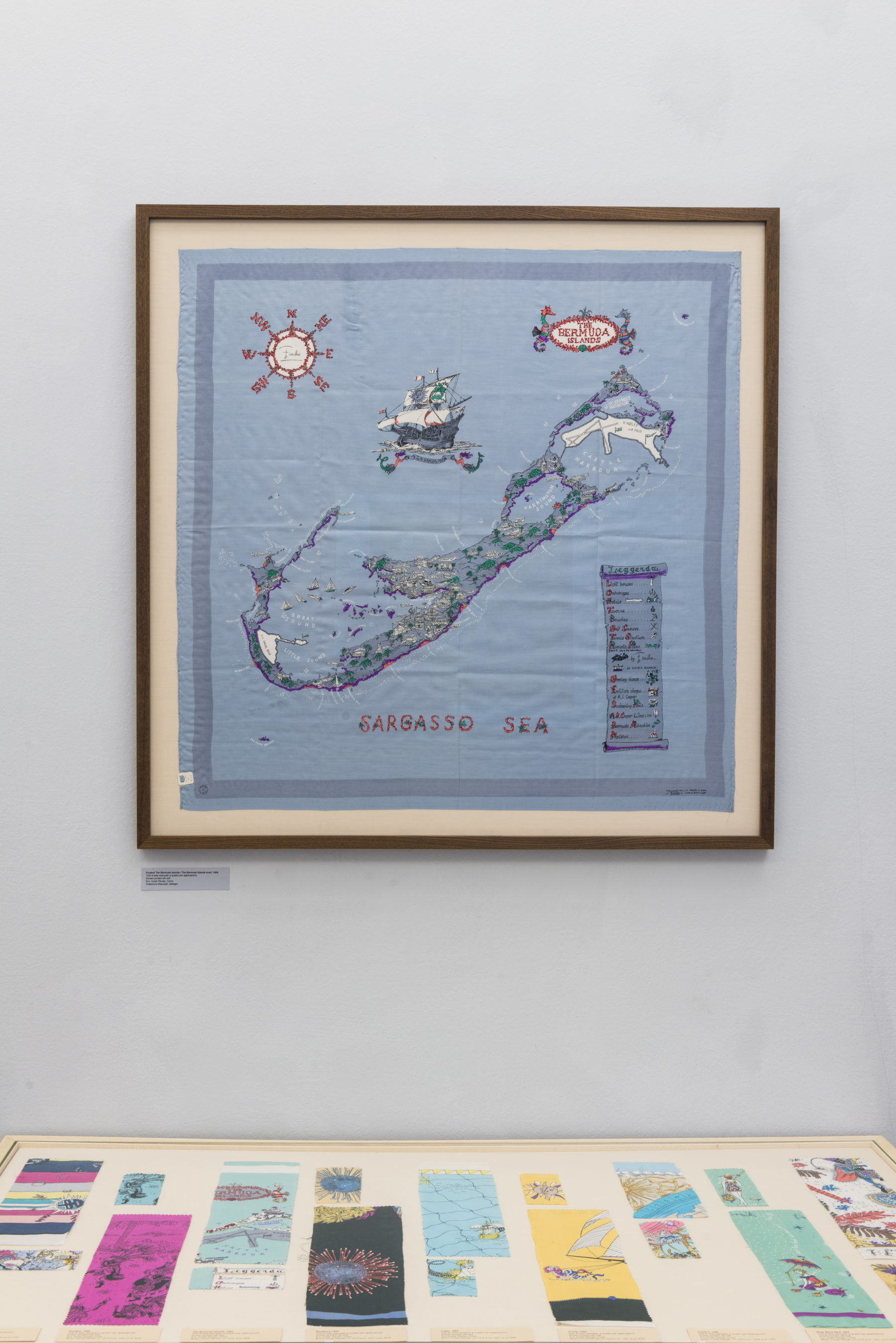 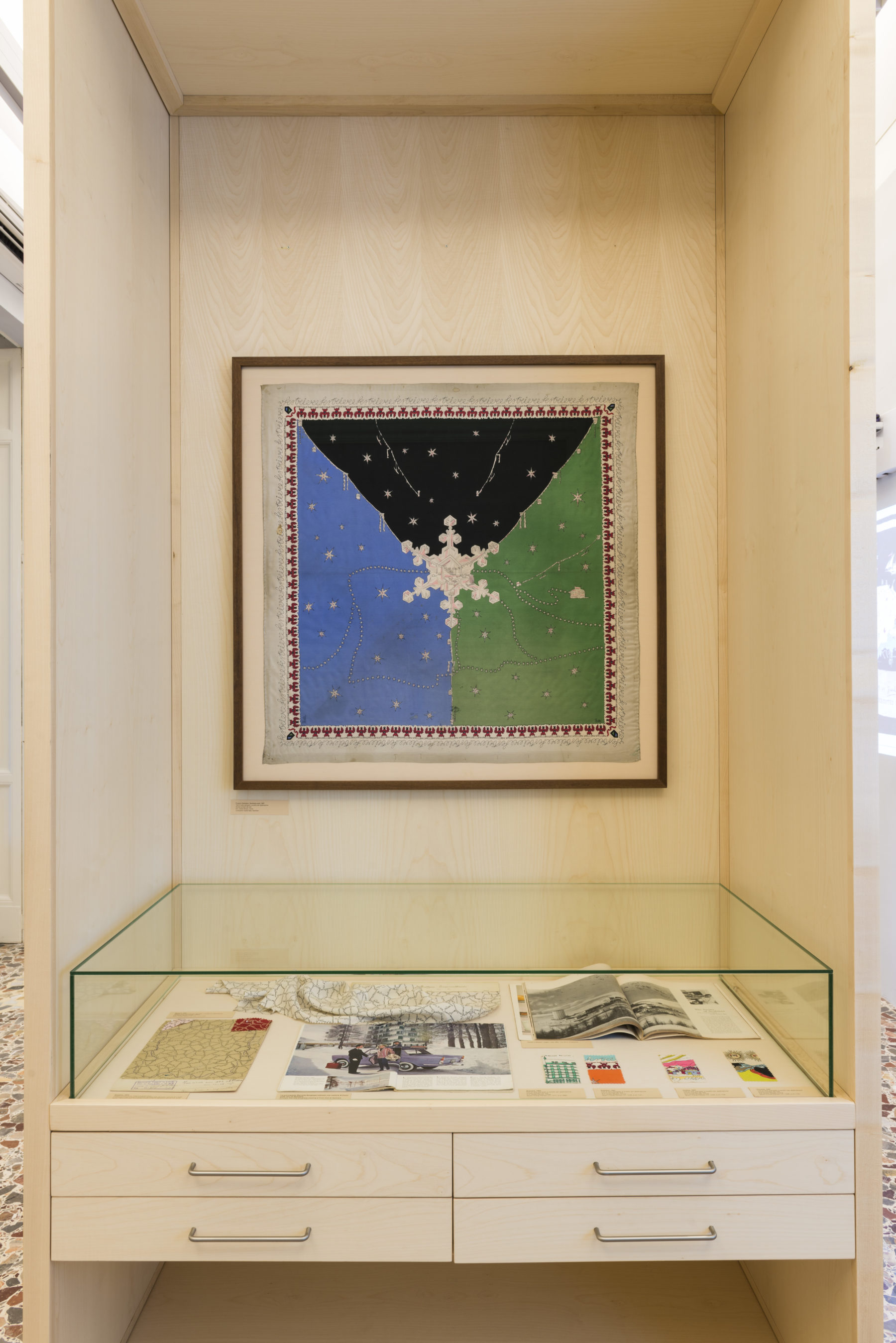 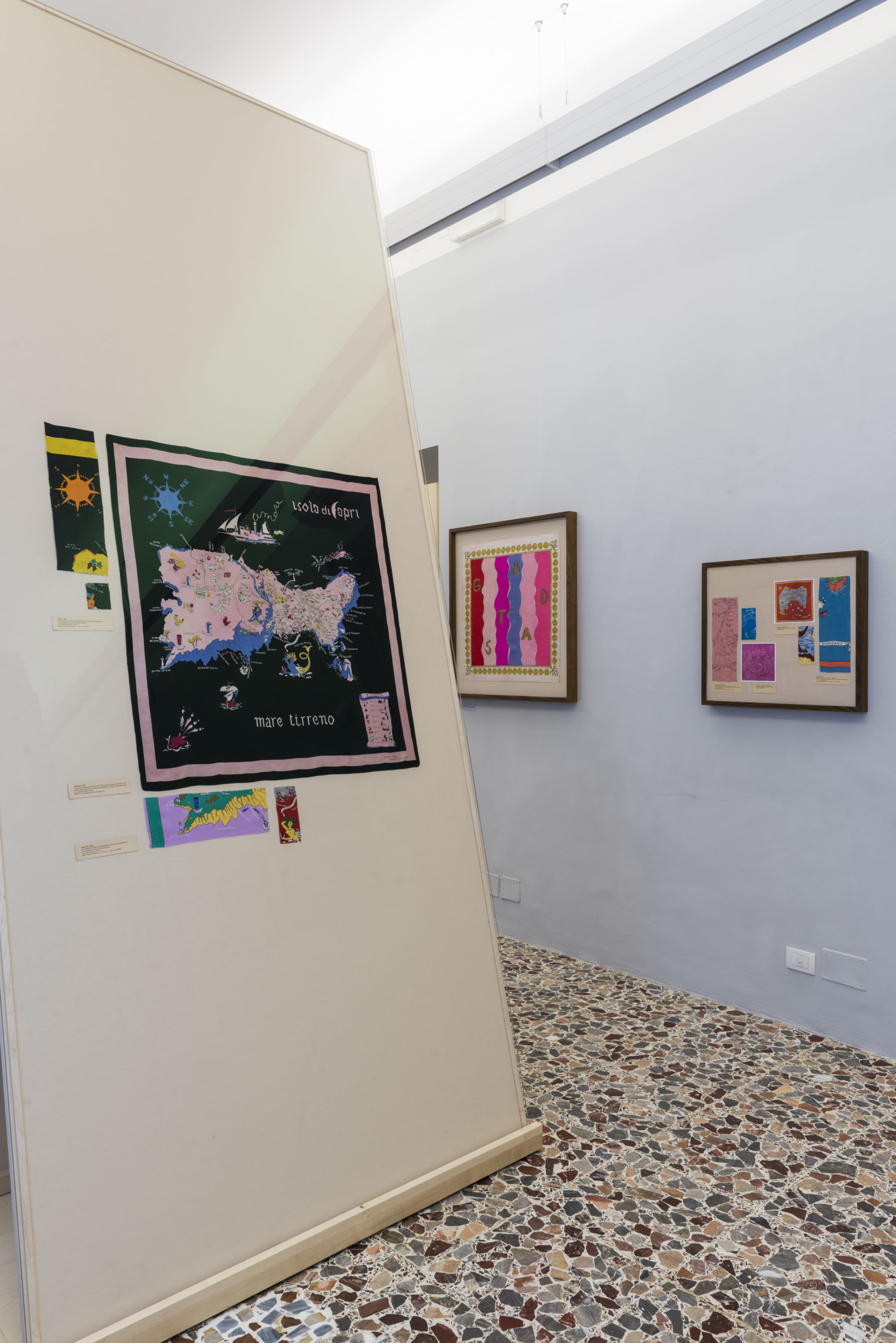 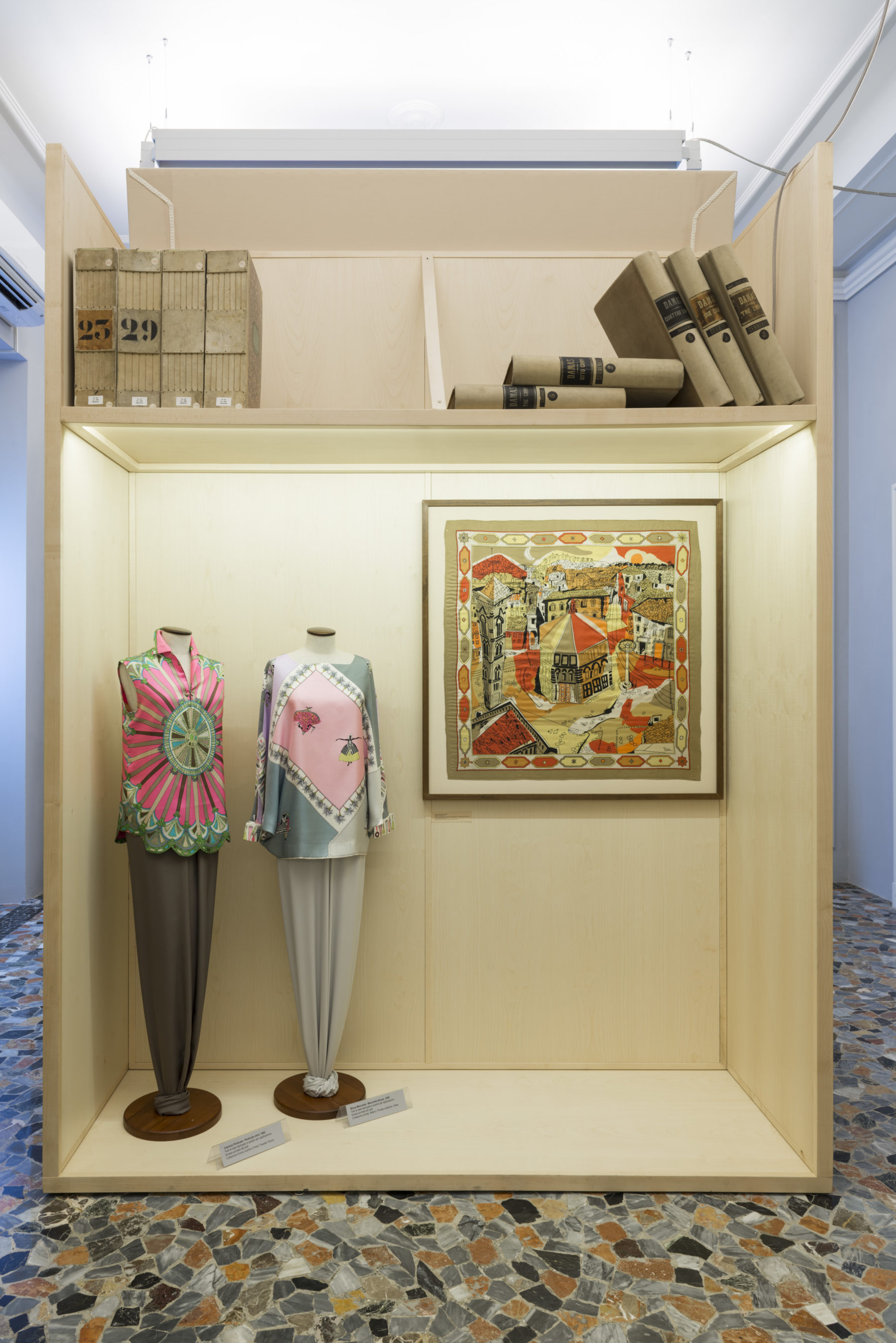 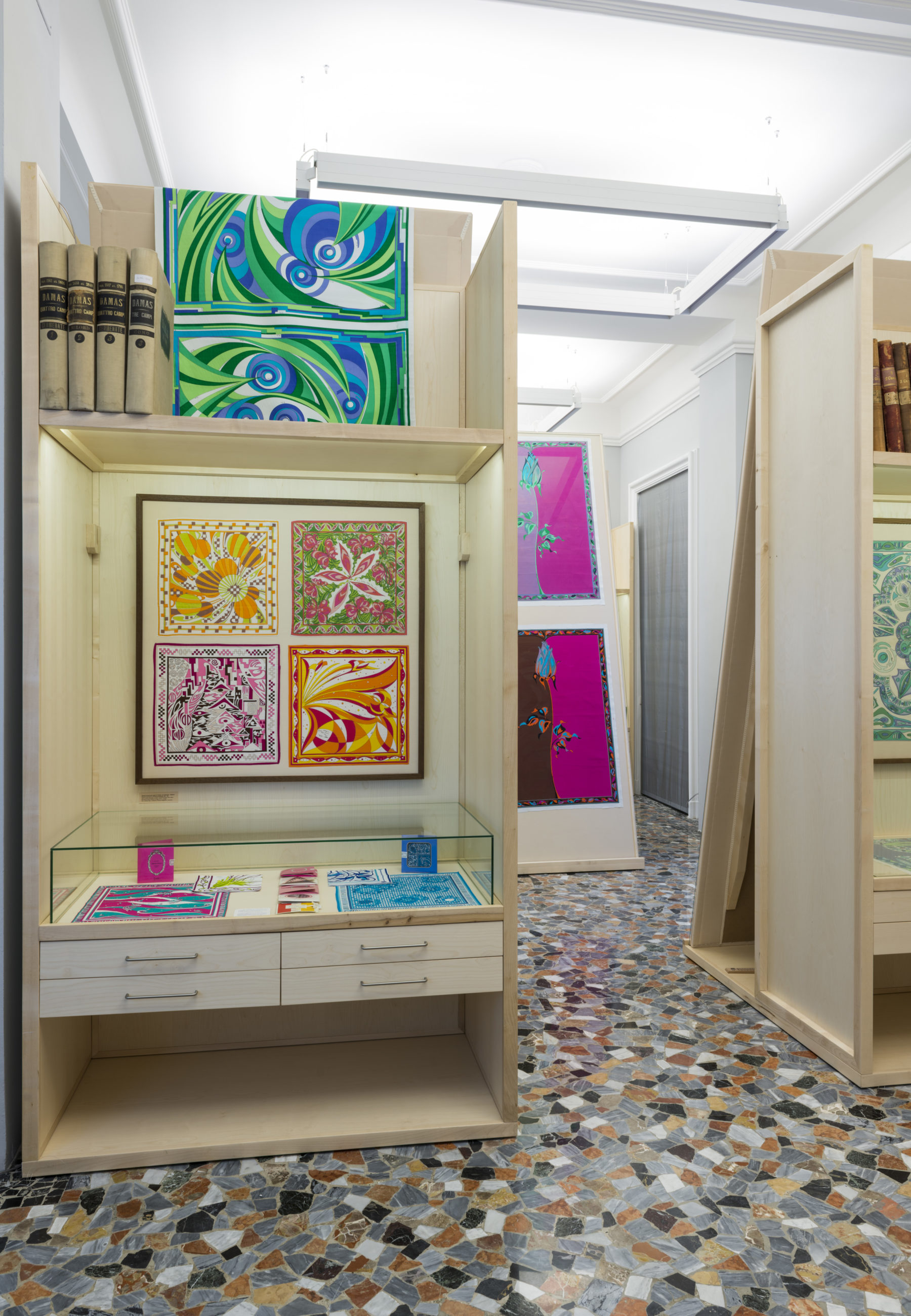 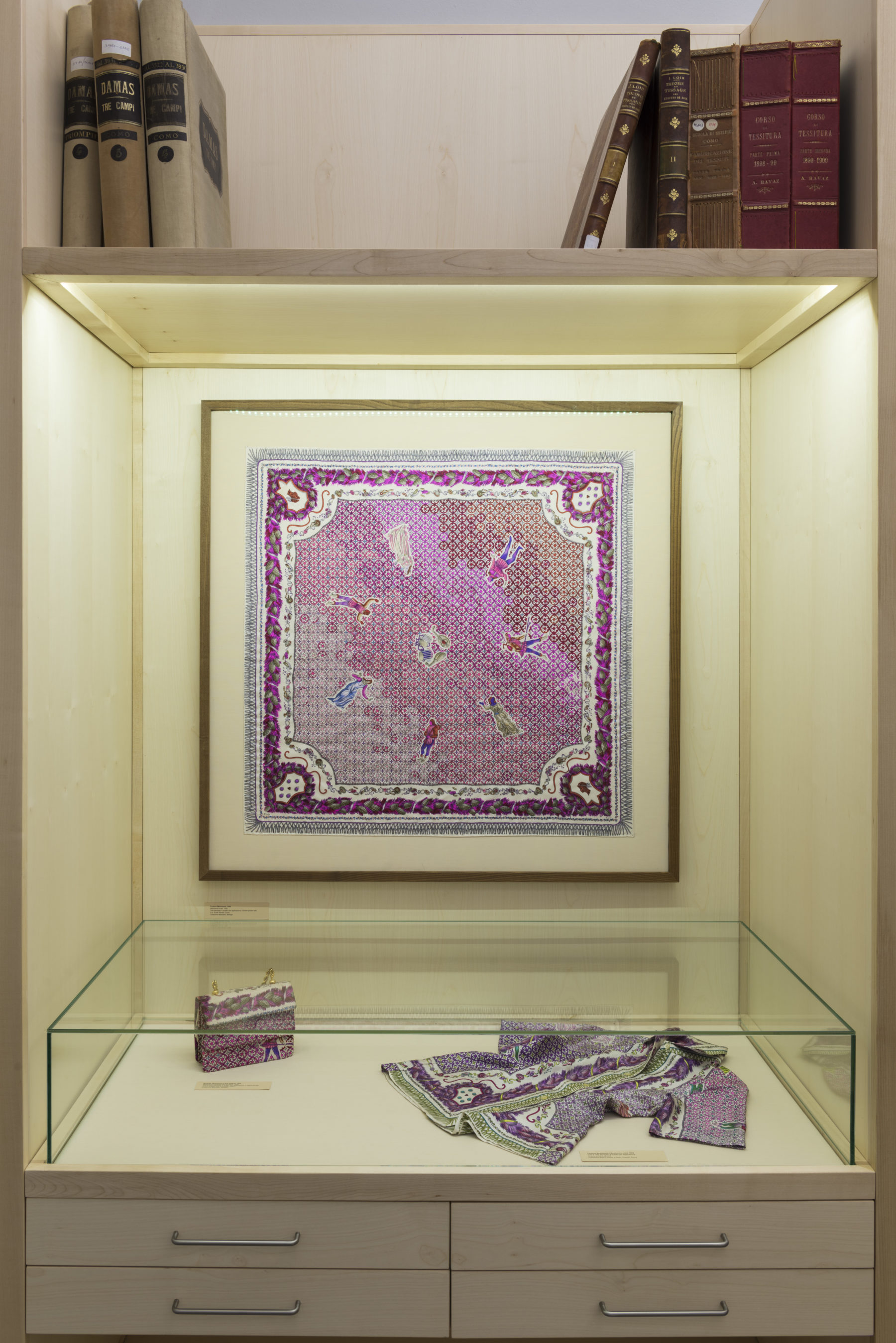 Emilio Pucci and Como, 1950-1980 opened on May 6th, 2014 at Villa Sucota. The exhibition – curated by Margherita Rosina and Francina Chiara – was on display until the autumn. It analysed the working relationship between Pucci and the textile industries of the Como area, a collaboration that began in the 1950s and continued throughout the following decades.

Through its sections, the exhibition documented the beginning and the success of Pucci’s creations, from the early drawings inspired by the Italian countryside and folklore: the sea of Capri, the famous ski resorts of the Alps, Siena’s Palio, the Sicilian traditions, and the beauty of Florence.

As explained by Emilio Pucci during an interview with the Italian magazine Oggi in 1960: "My passion for colour led me to find new possibilities [...]. I am convinced that Italy offers an inexhaustible variety of motifs and ideas and I have tried to transfer on textile its most significant elements."

The exhibition unveiled the research on the sample books of the manufacturer Ravasi of Como, the first textile industry in the area to work with Pucci from the early 1950s to the mid-1960s. The pages of the sample books from the MuST’s collections highlighted the contribution made by Como’s designers, printers, tracers, and dyers who were able to develop new shades of colour such as "Rosa Emilio" or the "Blu Capri". A selection of materials produced in Como during the 1970s and 1980s completed the show, establishing further evidence of the long-term collaboration between Pucci and the local textile district. There were sample books, original drawings by Pucci, printing proves, accessories and clothing documenting the creative process: from the idea to the dresses and scarves made famous by the shots taken by some of the most iconic fashion photographers.

Moreover, POLIteca(Design Knowledge Centre) -Dipartimento Design e Archivi Storici-ASBA -Politecnico di Milano provided images from the Haertter’s fund, which held the images of the famous photographer. Loans from the archive of the Emilio Pucci Foundation of Florence-numerous images of dresses and scarves -allowed the visitors to better understand the use of the textiles on show.

At the entrance of the exhibition, four artworks by Flavio Favelli from 2009 established a small foray in the field of contemporary art. These works, while a part of the series Planisfero and Bar Singapore Palermo, started from some of Emilio Pucci’s scarves on which the artist intervened by drawing with coloured markers. Chosen by Favelli for their style "out of time", Pucci’s scarves were transformed by the artistic intervention and gained new meanings, building a direct bridge with our contemporaneity.

The exhibits on display came from the MuST collections and the Museo didattico della Seta, Como, Enrico Quinto and Paolo Tinarelli, Rome, A.N.G.E.L.O. Vintage Archive, Lugo, Masciadri, Bellagio and from other private collections. The exhibition catalogue, published by NodoLibri, Como, provides additional information to further research this subject. Starting from textiles–mostly produced in Como-the volume analyses the "story of Pucci" in parallel with the rise of fashion boutiques, which has contributed to the success of the "Made in Italy".