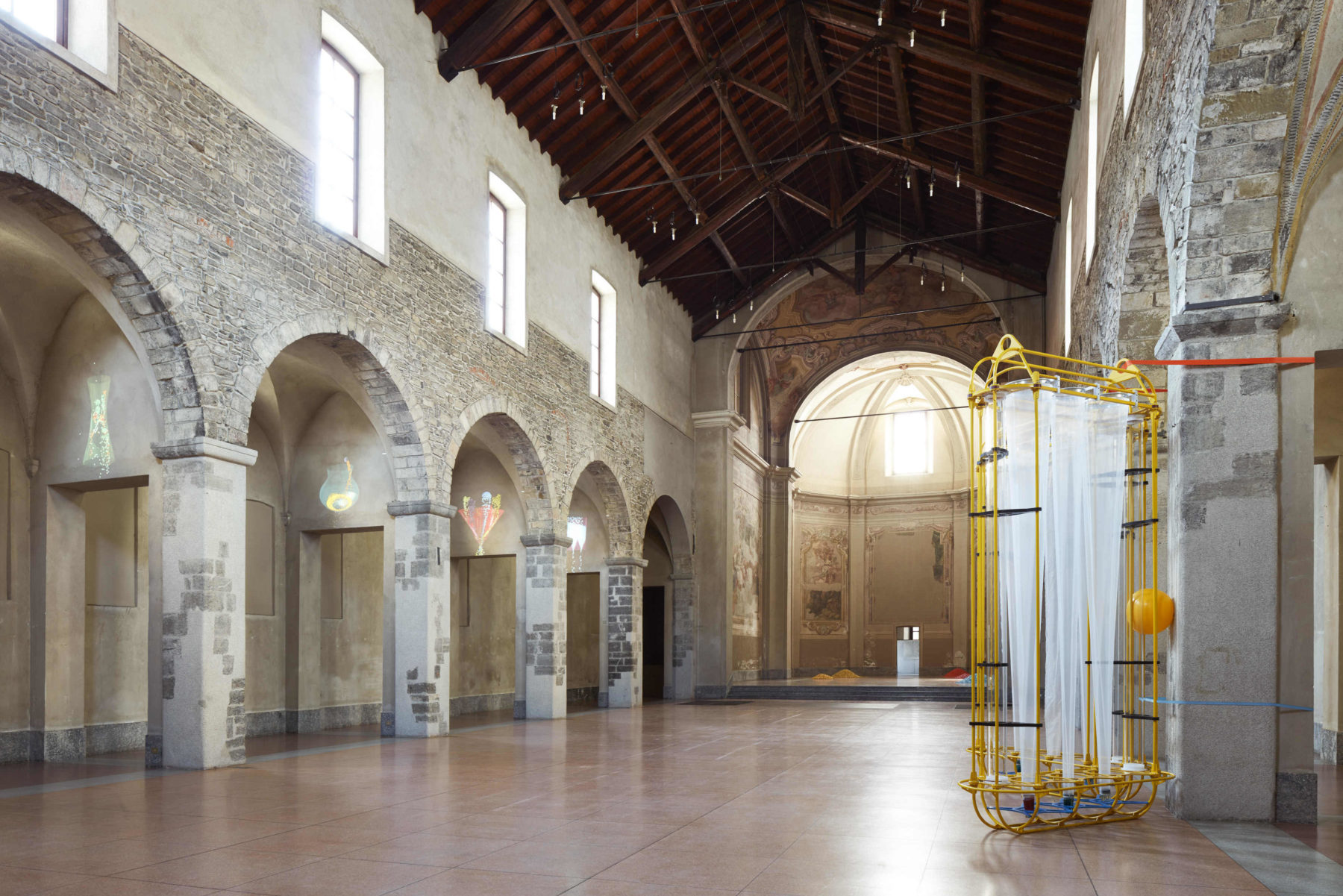 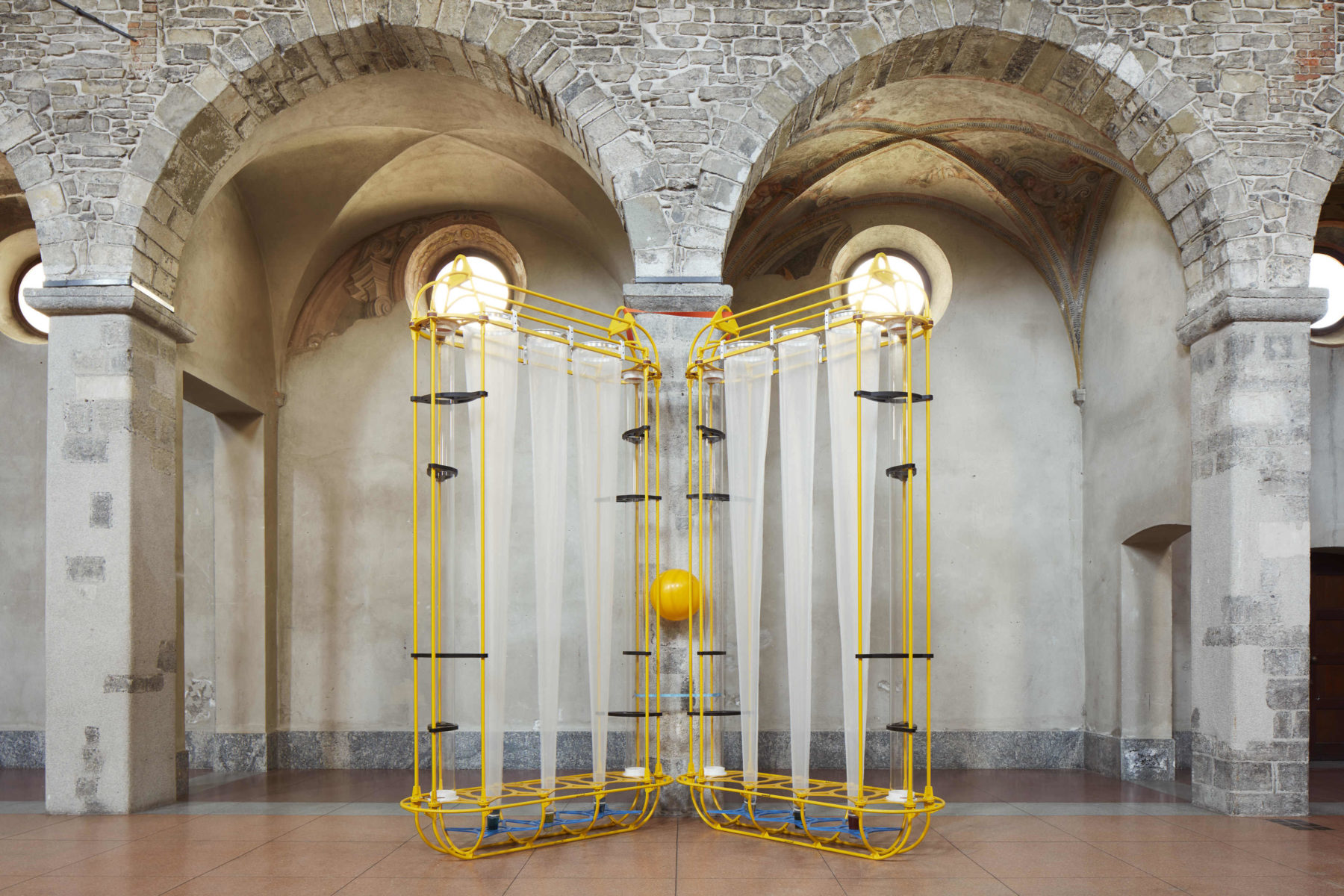 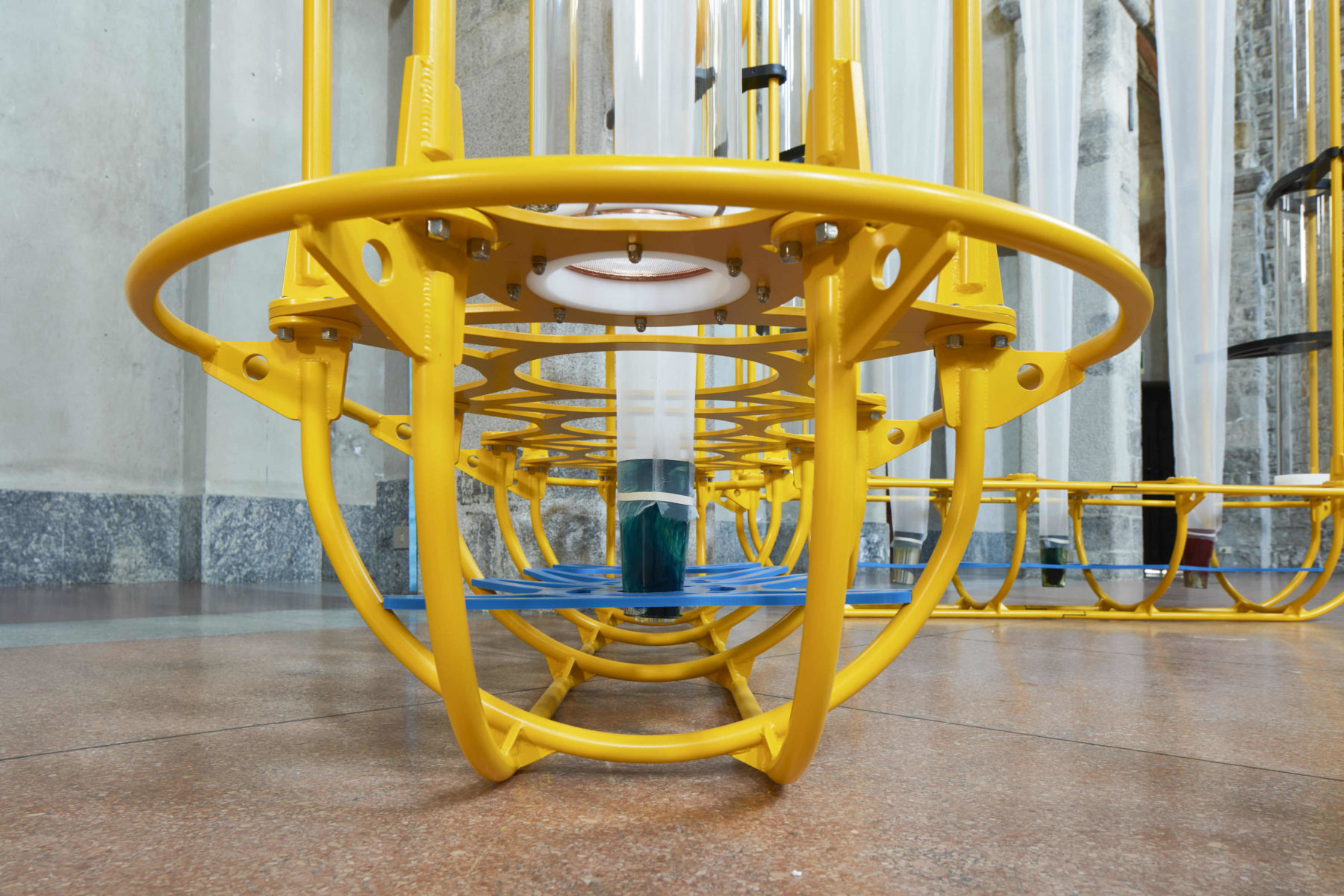 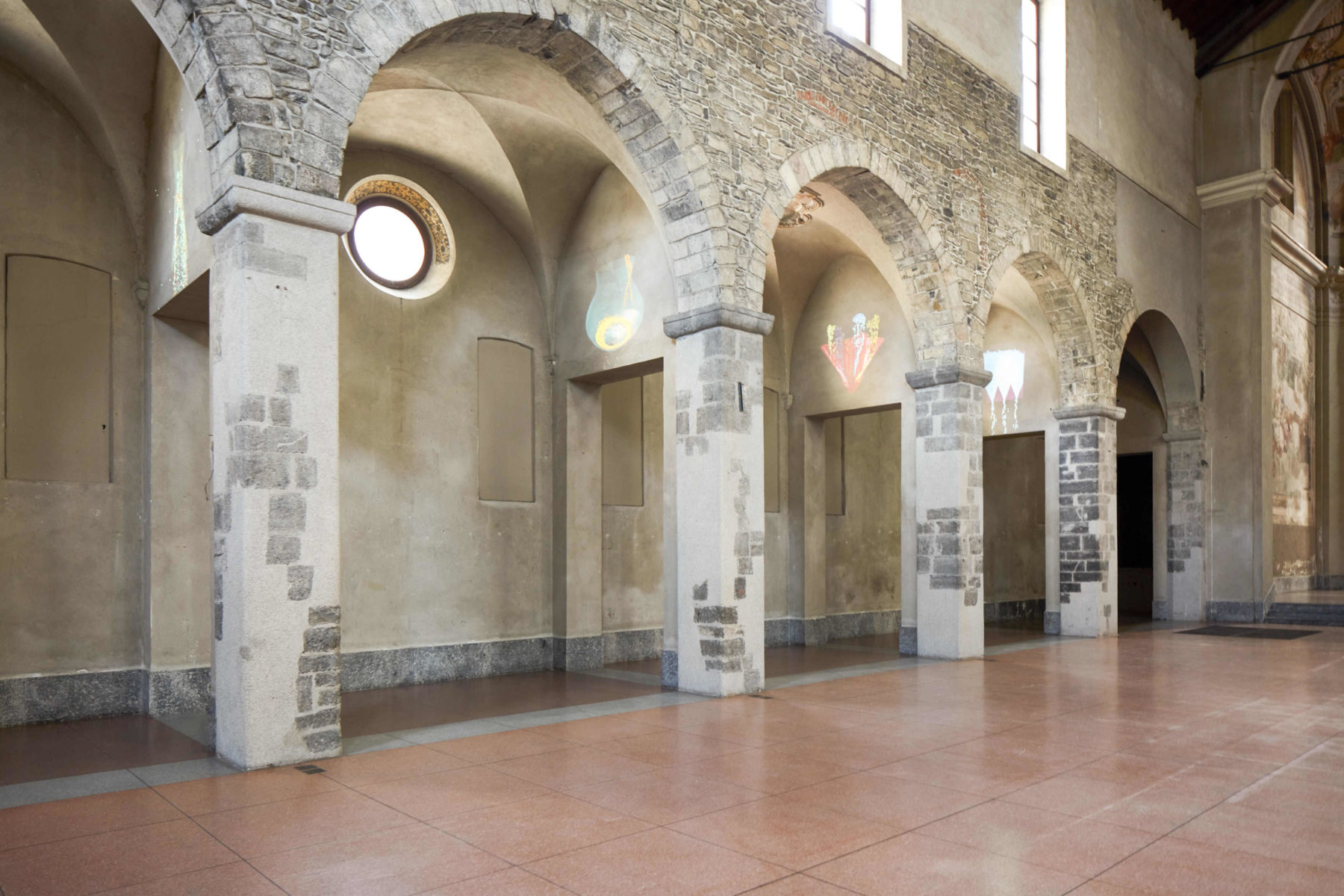 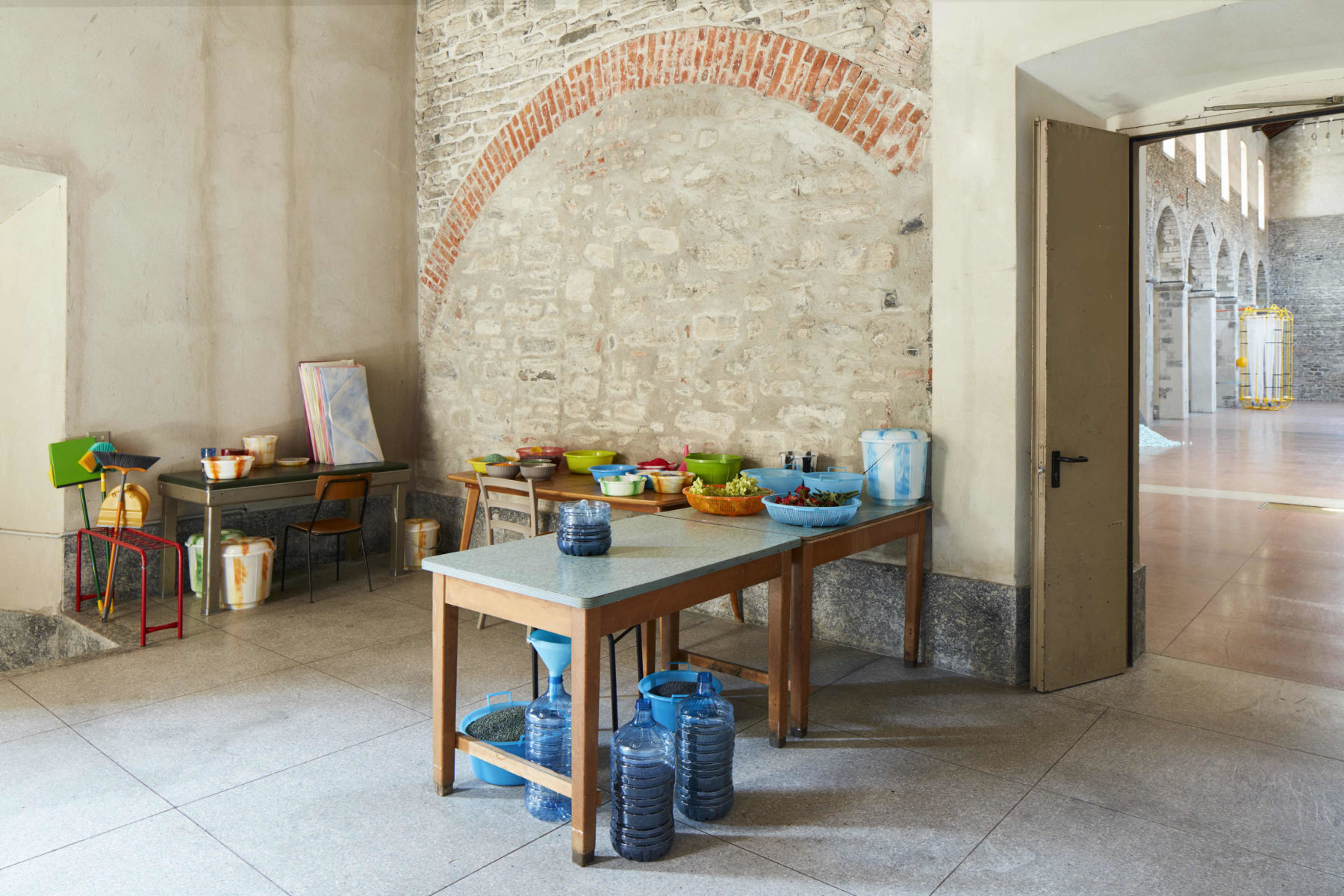 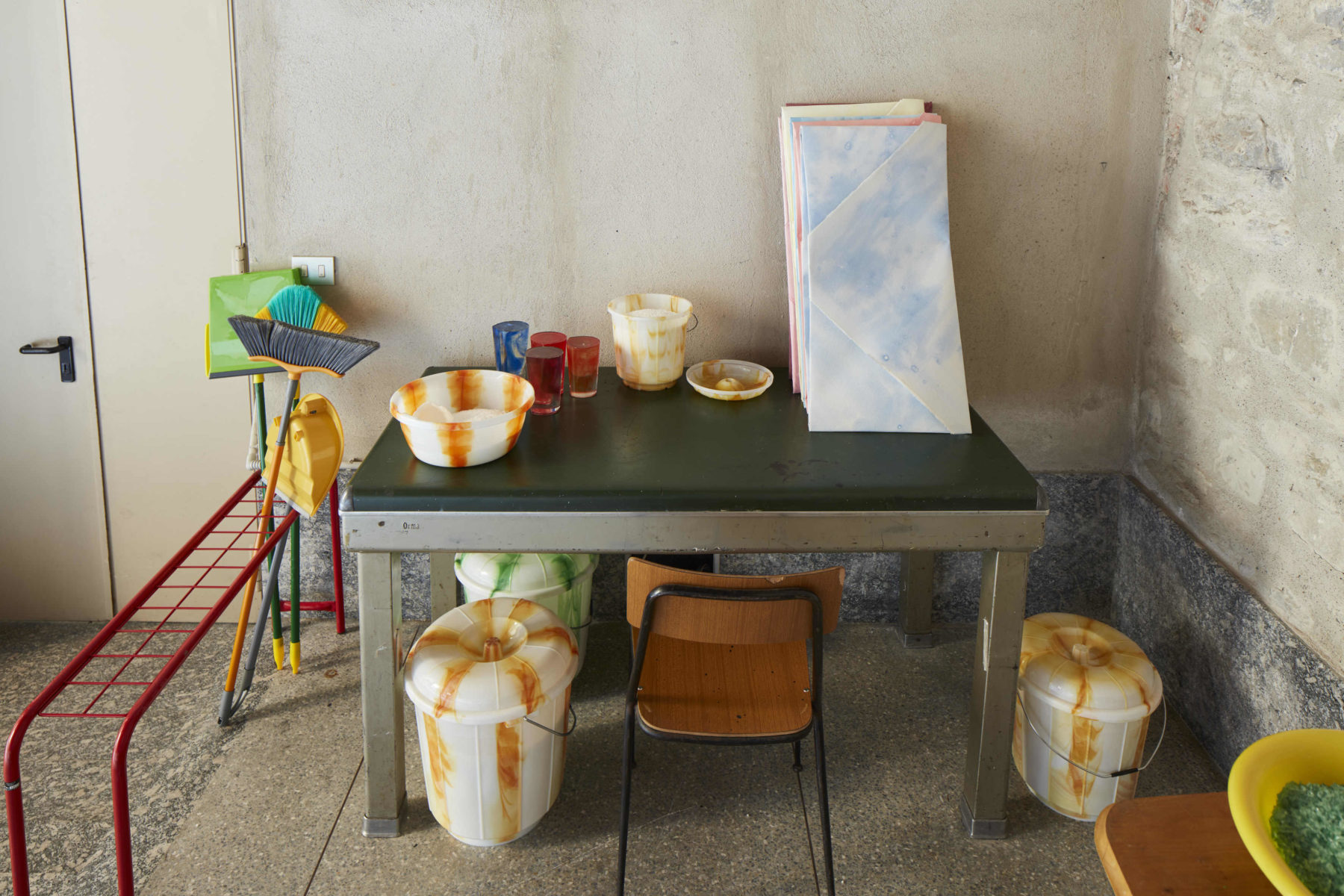 Reinstalled at San Francesco, Yellow Machines responded to the austere architecture of the Romanesque church with an explosion of color and with its complex vertical structure designed to hold light gauze funnels. Solid but apparently precarious - the work appeared anchored to the column only by an orange support strap - the sculpture suggested a mysterious and devoid function, as a "bachelor filtering machine".

It was precisely the themes of filtering, translation, reduction and transaction between different formats and media at the center of Mackie's work of recent years and traversed the entire exhibition at San Francesco. Presented together with the Yellow Machines a group of computer animations, Powder People, and a series of sculptures, Plastics Thinking - created specifically for the minor aisle, the apse and the sacristy of the church - articulated the artist’s discourse on these themes.

Departing from the notion of "powder people" - term used to define the optimal passage of large masses of individuals through public facilities such as subways, squares or stadiums - the video animations used highly sophisticated technology to give back an image of channeling, cleaning and filtering processes whose abstract virtuality suggested a direct link with the dominant technologies used to control the contemporary human experience. In the apse and in the sacristy of the church, there were installations composed of abrasive media and plastic re-granulated materials. These were the result of the most advanced research in the field of industrial cleaning and finishing that Mackie paired with everyday tables and plastic containers suggesting a formal and ideological continuity between futuristic research and everyday life. The church was transformed not only into an exhibition space but also into a laboratory in which the implicit and explicit connotations of the various materials, extrapolated from their function, were magnified.

In collaboration with: Comune di Como
With the support of: Embassy of Canada, Fondazione Cariplo
Thanks to: Gianeco, Mtm Plastics, Rollwasch
Technical sponsor: Epson