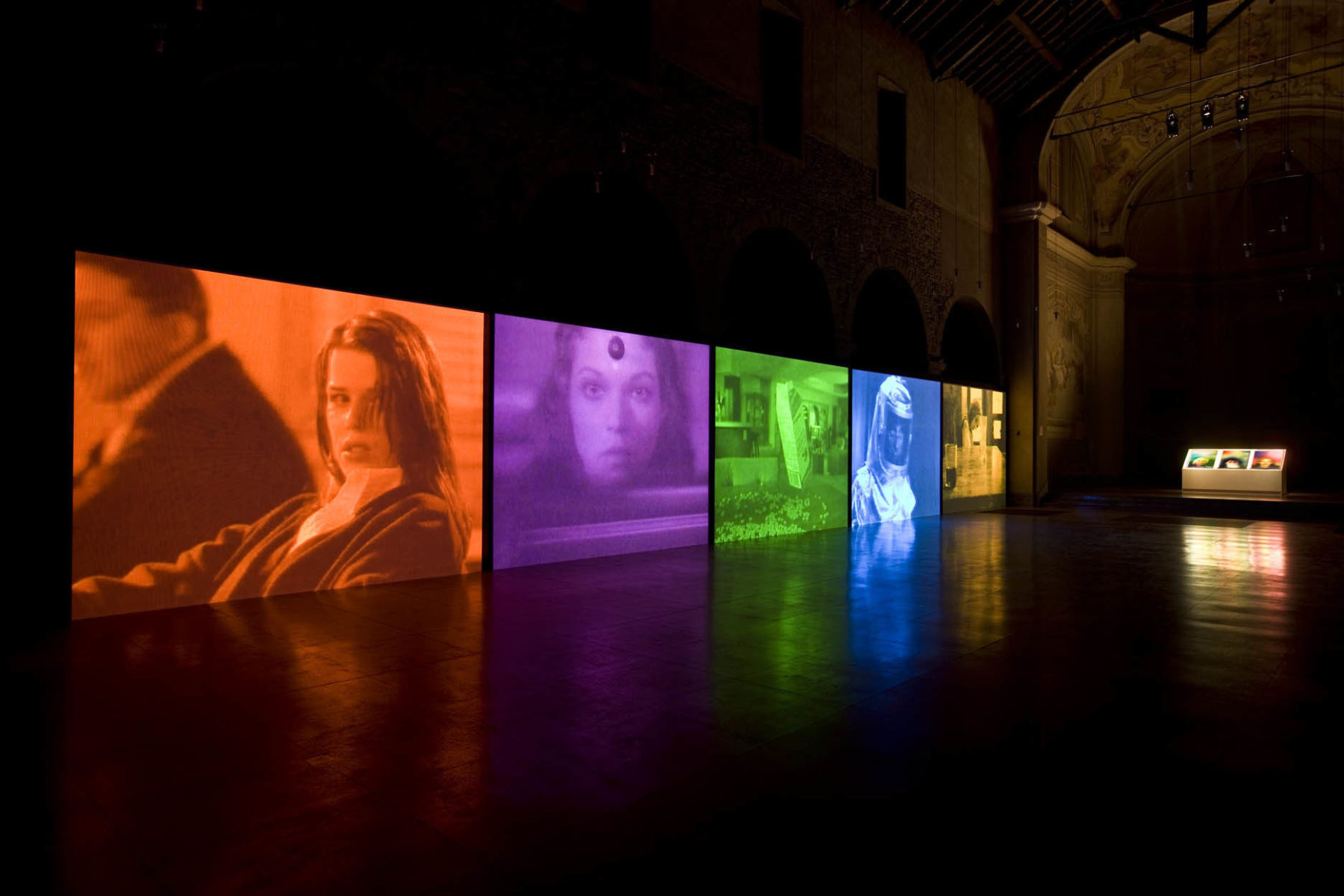 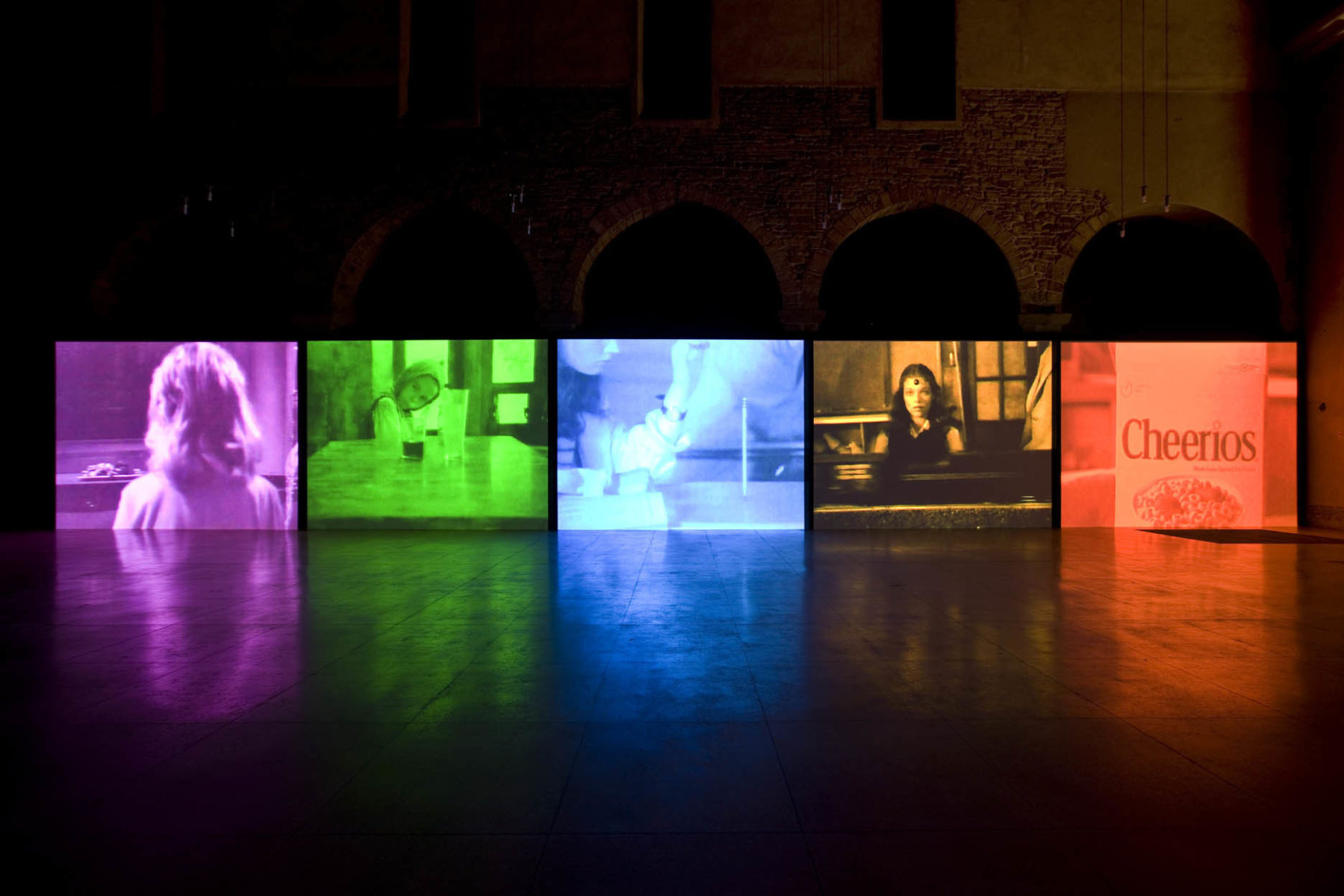 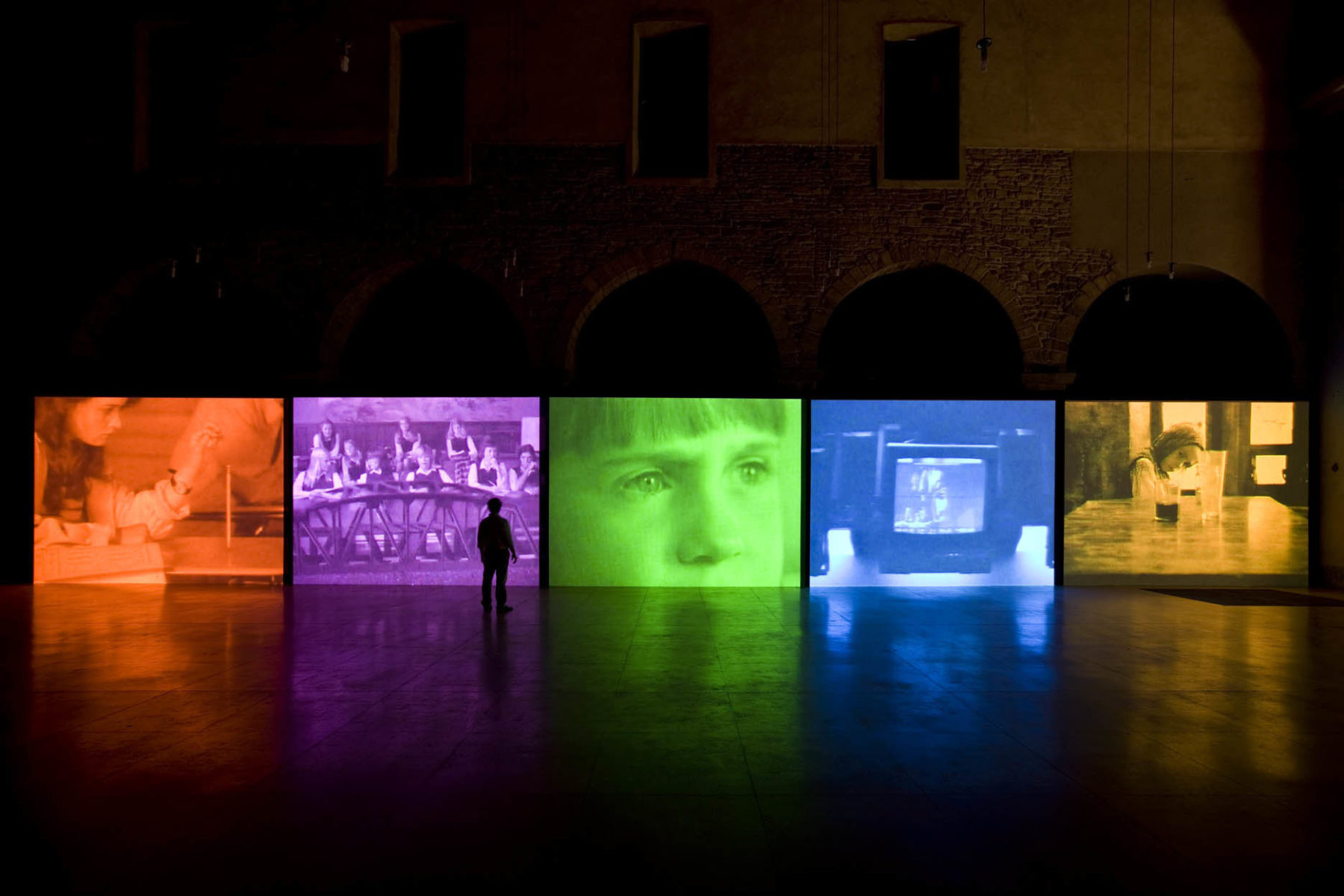 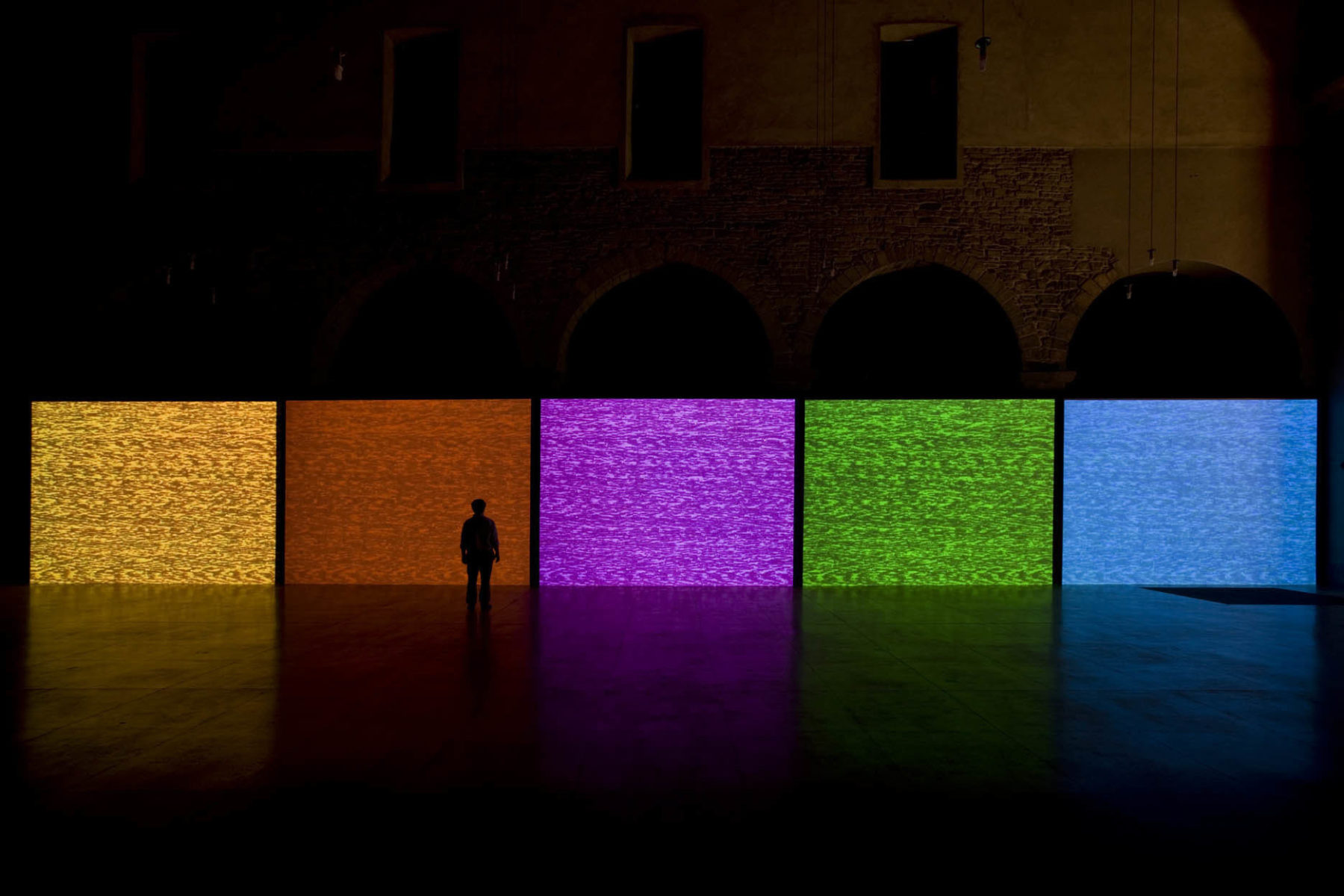 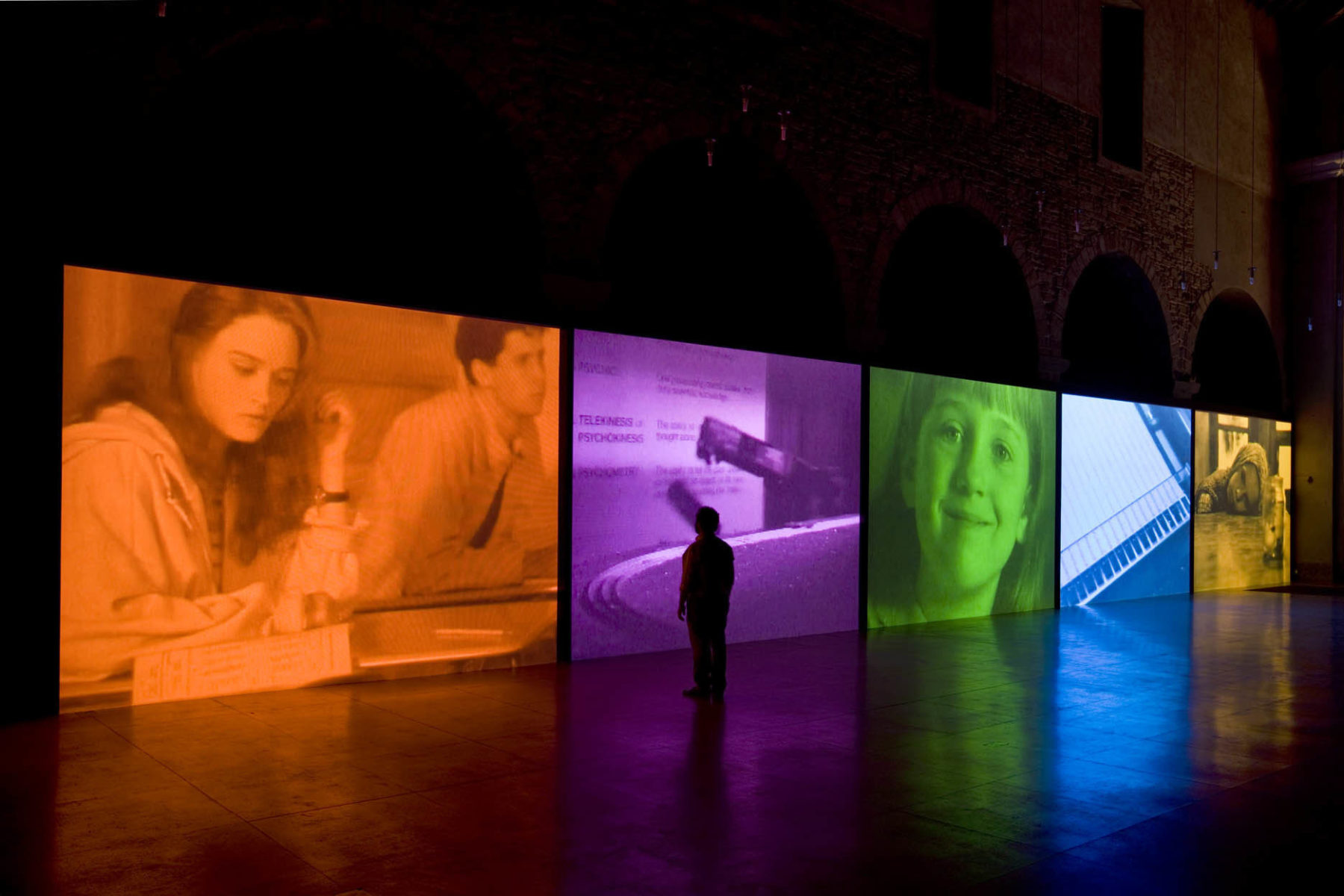 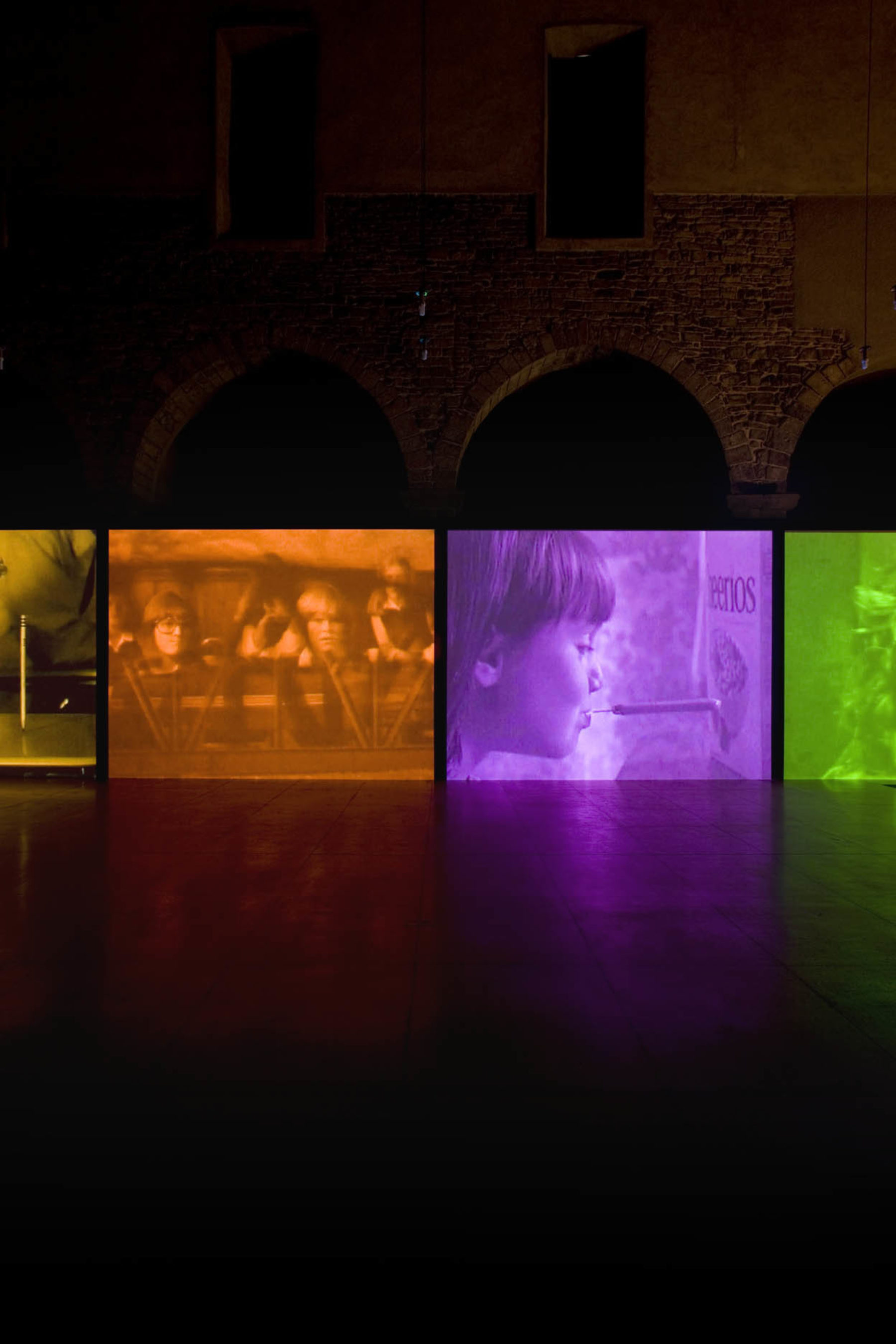 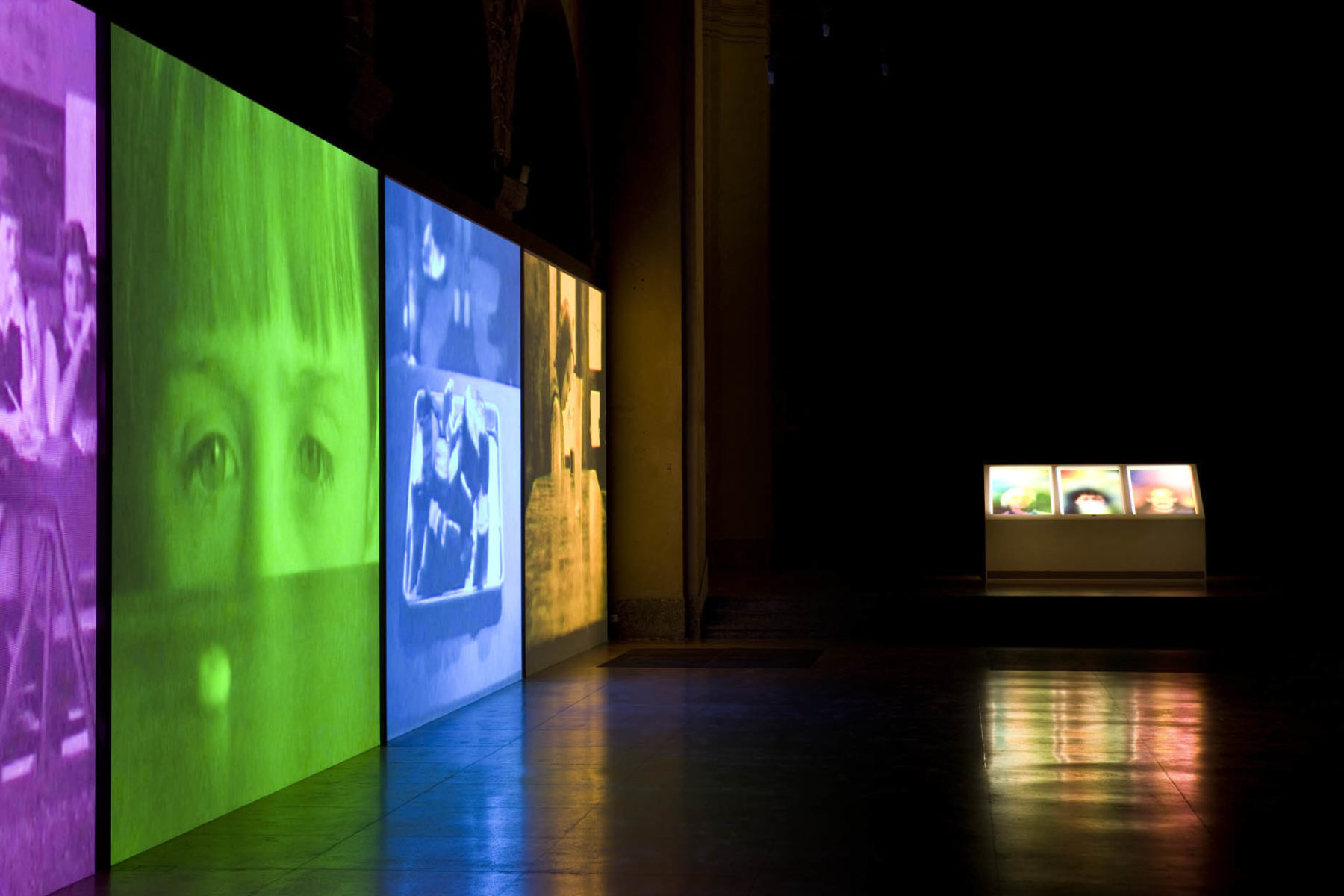 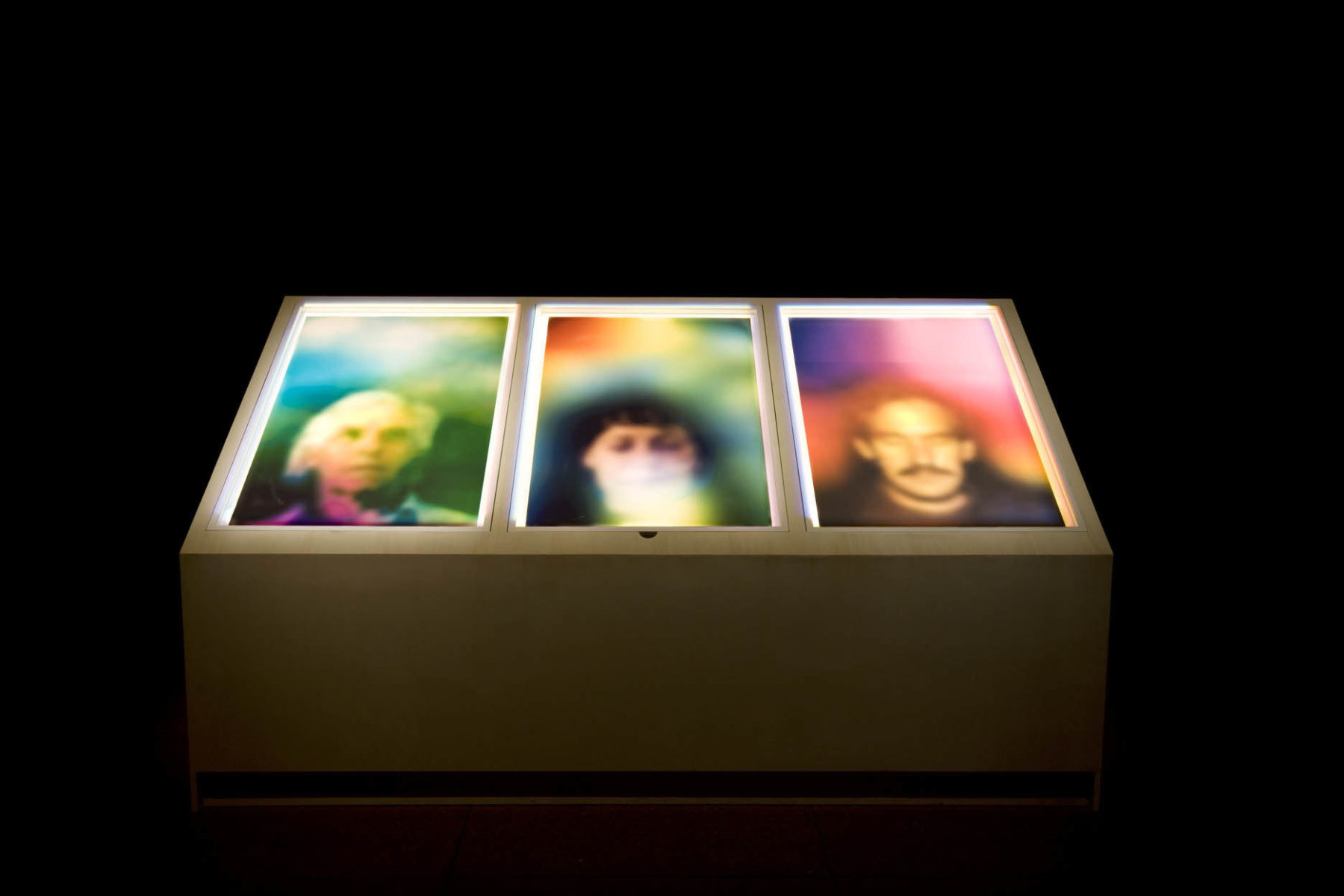 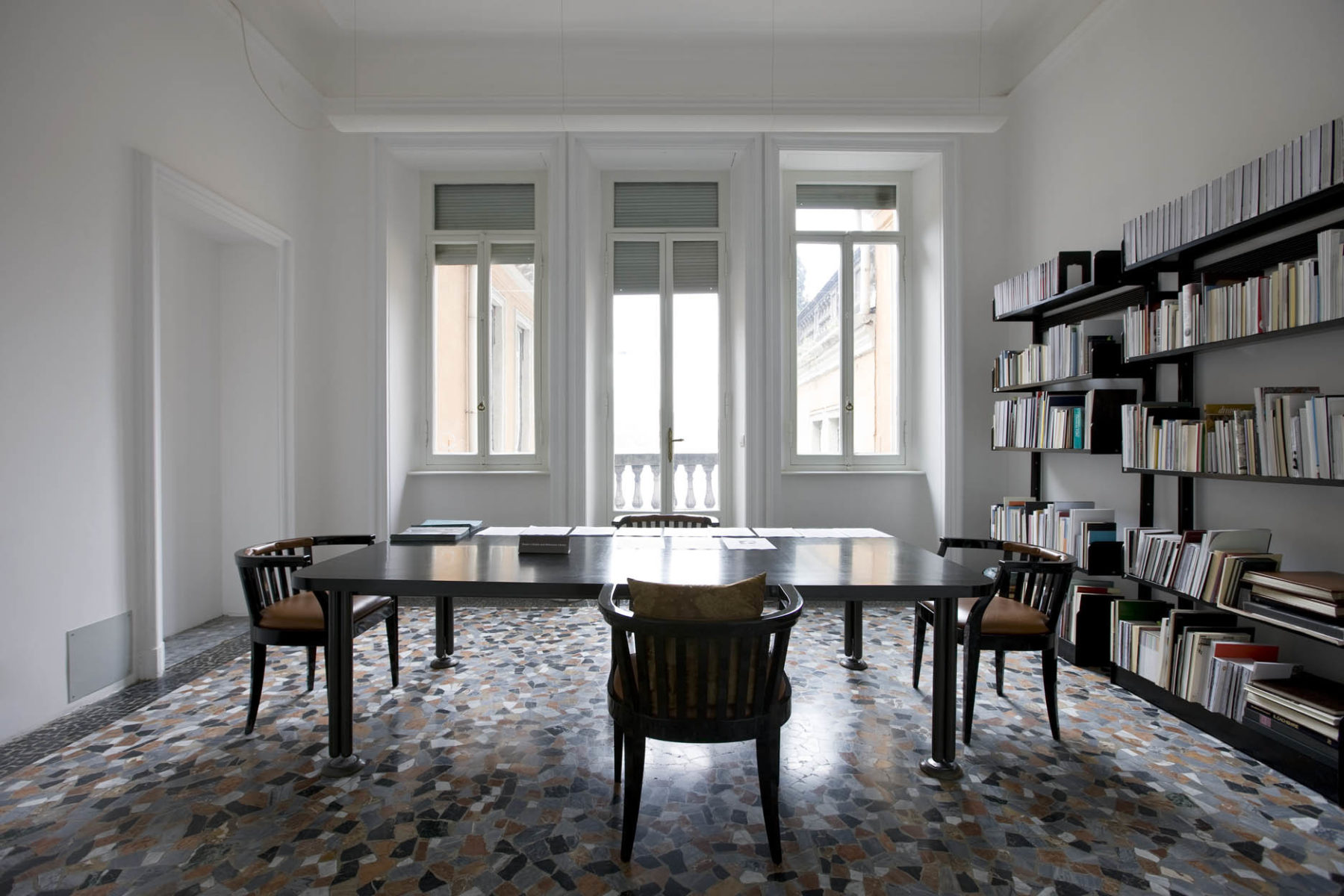 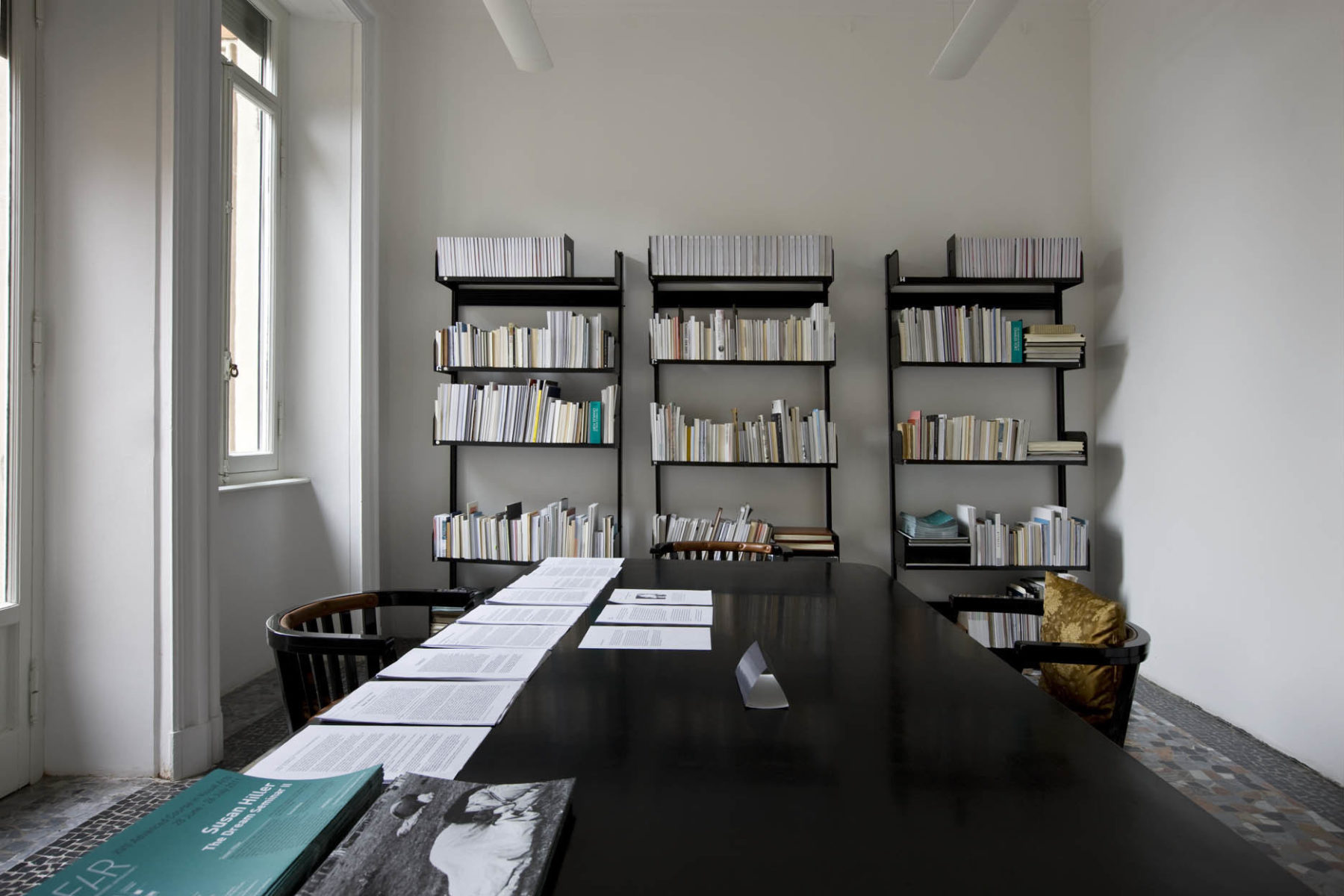 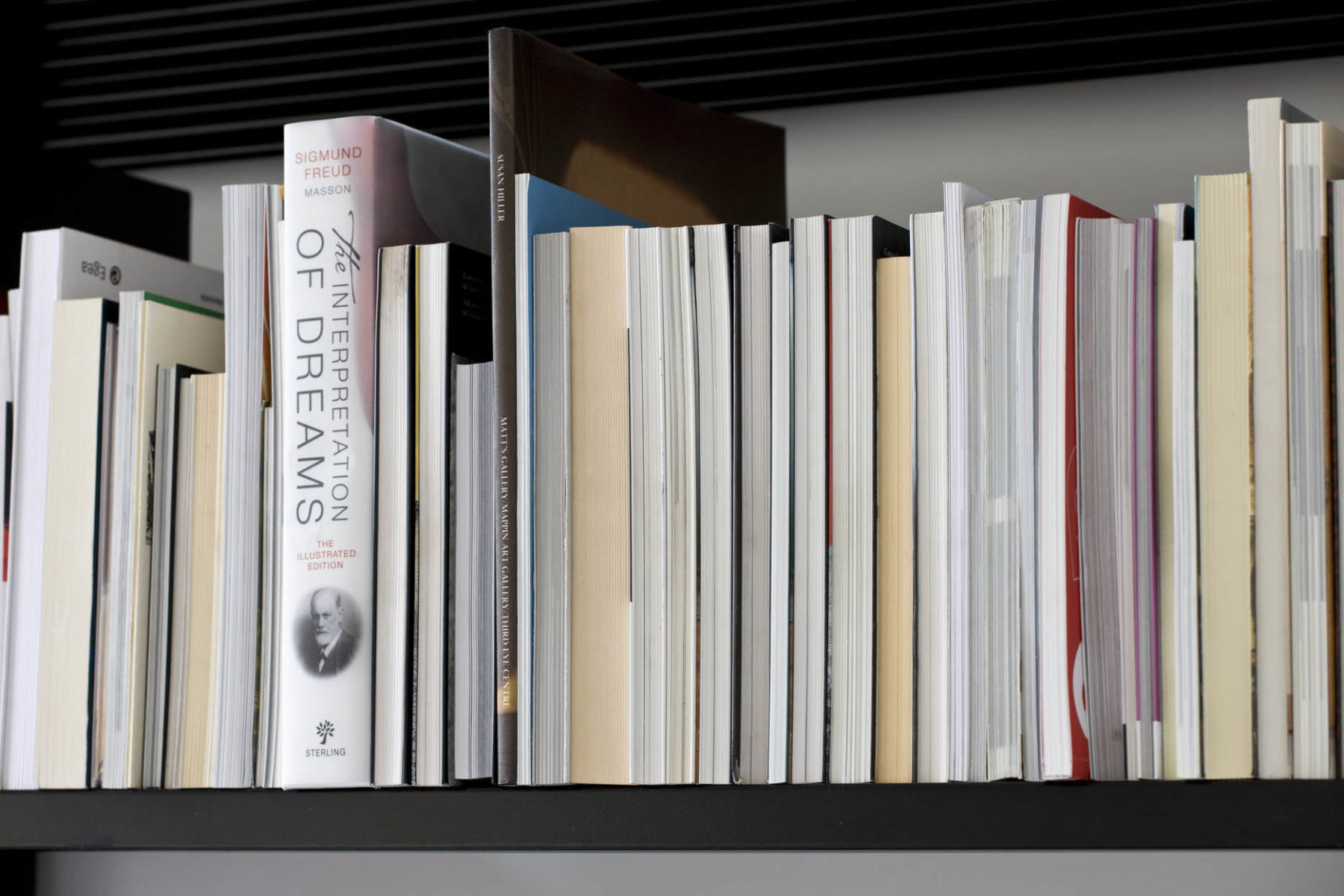 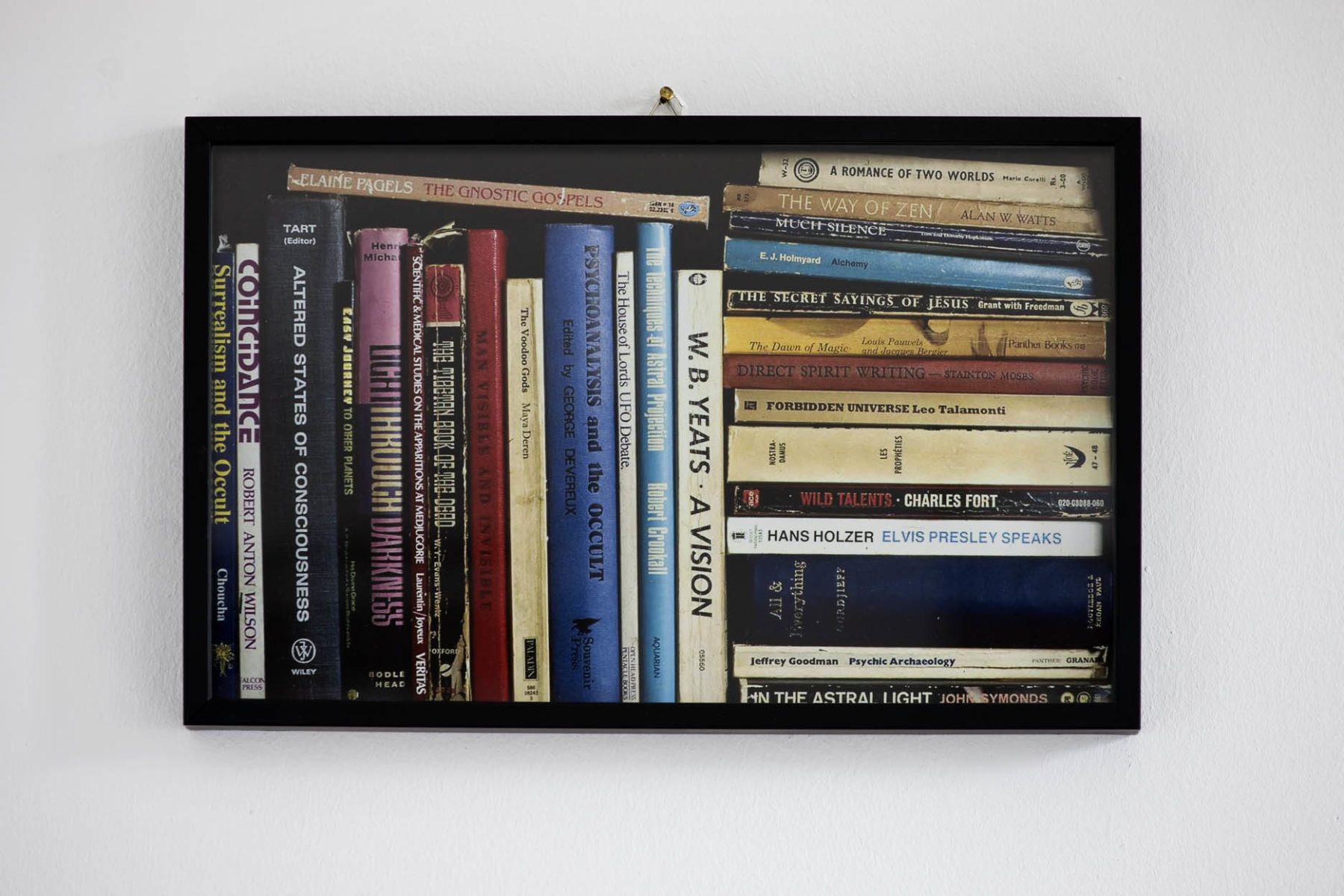 Susan Hiller's exhibition was centred on the impressing and fascinating 5-channel installation PSI Girls (1999), showed in Italy for the first time and installed specifically for the space of the Church of San Francesco.
PSI Girls presented five brief loop sequences of girls with paranormal telekinetic powers, depicted while concentrated in producing the movement of an object with the strength of their mind. The sequences were taken from five famous films (The Fury by Brian De Palma, 1978; The Craft, by Andrew Fleming, 1996; Matilda, by Danny De Vito, 1996; Firestarter by Mark Lester, 1984, and Stalker, by Andrei Tarkowsky, 1979), whose colours were altered by Susan Hiller. The artist transformed each film in blue, yellow, red, purple, and green monochrome. The original audio of the films was replaced by a single soundtrack, taken from the record of a gospel choir of St. George's Cathedral of Charlotte, North Carolina, USA.
The colours slid from one sequence to another in a casual way and were projected in the surrounding environment, thus producing a constant alteration of the perception of the surrounding space. The alternation of sound and silence, together with the moving colours and the length of the single sequences, created the hypnotic effect of a performative work that was constantly changing. This work immersed the viewer in an iridescent perceptive flux, and offered many possibilities of being seen and interpreted: from the representation of the "alienated" condition of the teenager to that of the feminine identity; from the use of fonts to the artist's possibilities of championing and manipulation, from a possible reflection on power to that of the production of the contemporary imagery of the gender movie.
These images oscillated between different dimensions that went from the dreamlike experience, between alienation and activity, to a field of seduction from the latent erotism of the sequences, and even to a more contemplative dimension. The Aura: Homage to Marcel Duchamp (2011), a photographic installation conceived by the artist for the exhibition that accompanies PSI Girls, contributed to set the Church of San Francesco in an obscure, mysterious, disturbing, but perhaps revealing environment. The exhibition opened a way to a dialogue among art, illusion, magic, and alteration of perception, themes close both to the great tradition of the history of art of late Modernity, and to the instances explored by Susan Hiller during the workshop The Dream Seminar II.

Susan Hiller was born in the USA in 1949 and lived and worked in Britain since the 1970s when she became known for an innovative artistic practice excavating the overlooked or ignored aspects of our culture. She adopted and combined media in ways radical for their time and she was acknowledged as an important influence on younger generations of artists.
Hiller cited Minimalism, Fluxus, aspects of Surrealism, anthropology and feminism as influences on her unique practice. She juxtaposed knowledge derived from anthropology, psychoanalysis and other scientific disciplines with materials generally considered unimportant, like postcards, wallpaper, popular movies and stories of UFO sightings, balancing the familiar and the unexplained and inviting the viewer to participate in the creation of meaning. She collected and used images, objects and sounds to create new contexts, incorporating traces of memory, history, and personal allusions. Her practice often investigated subconscious processes, including dreaming, reverie, automatic writing and improvised vocalizations. Privileging the repressed, forgotten or unknown, Hiller analyzed, recontextualized and conferred status on what lies outside or beneath recognition.
Solo exhibitions of Susan Hiller's work were held at Tate, London; Castello di Rivoli, Turin; Moderna Museet, Stockholm; Joy Art Gallery, Beijing; Kunsthalle, Basel; Kunst-Raum des Deutschen Bundestages, Berlin; Museu Serralves, Porto; Fondacion Mendoza, Caracas and other public institutions.
Hiller explored the intersections of memory, history and the unacknowledged in a number of publications. Her talks and interviews are collected in two books: The Provisional Texture of Reality (JRP Ringier, 2008) and Thinking about Art: Conversations with Susan Hiller (Manchester University Press,1996). She is the author of The J- Street Project (DAAD and Compton Verney Trust, 2005) and After the Freud Museum (Bookworks,1995; reprinted 2000).